HANAN – The Story of an Arabian Mare… 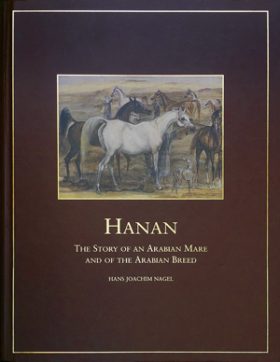 Dr. Hans Joachim Nagel graduated as social economist but has spent all his working life in the field of animal husbandry. For more than 40 years he has been involved with the development of modern animal breeding techniques in Eastern Europe and the Middle East. In the late 50s his business took him to Babolna, the Hungarian State stud. There he met for the first time the Arabian horse. Later he went to Egypt and met again the Arabian horse in El Zahraa, the Egyptian State Stud. It was in the days of Morafic and Moniet El Nefous, when the influence of Nazeer was still in the ascendant. There he felt in love with the filly Hanan and in 1967 he bought her, together with Mahiba and Marah.
This book is the distillation of thirty years’ experience of breeding at the highest international level and goes to the heart of the question that is foremost for every breeder: What am I trying to achieve? It is neither exclusive nor obsessional. It is the remarkable work of a man who is passionate in his beliefs.

Translation: Betty Finke
published 1998, hardcover, 276 pages with more than 150 photos,
To order the book, please go to our „Books about the Arabian Horse“ section
Price: 65,00 €

How to order an Online Subscription?

This website uses cookies to improve your experience while you navigate through the website. Out of these, the cookies that are categorized as necessary are stored on your browser as they are essential for the working of basic functionalities of the website. We also use third-party cookies that help us analyze and understand how you use this website. These cookies will be stored in your browser only with your consent. You also have the option to opt-out of these cookies. But opting out of some of these cookies may affect your browsing experience.
Necessary immer aktiv
Necessary cookies are absolutely essential for the website to function properly. This category only includes cookies that ensures basic functionalities and security features of the website. These cookies do not store any personal information.
Non-necessary
Any cookies that may not be particularly necessary for the website to function and is used specifically to collect user personal data via analytics, ads, other embedded contents are termed as non-necessary cookies. It is mandatory to procure user consent prior to running these cookies on your website.
SPEICHERN & AKZEPTIEREN