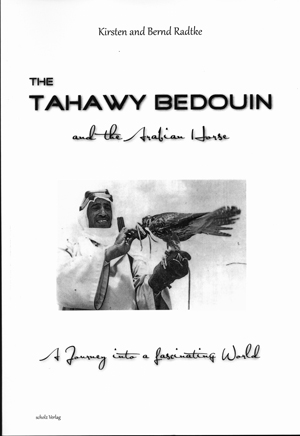 “It was worth, waiting for” – could be the headline for this book by Kirsten and Bernd Radtke about the Tahawy Bedouin of Egypt. They started their research for this book back in 1980, when they met with Sheikh Soliman of the Tahawys. That should not be without effect.
The Tahawy Bedouin are a horsebreeding Bedouin tribe, who once fought side by side with Mohammed Ali against Napoleon. Out of gratitude, they received some fertile land in the Eastern Nile delta, where from then on they bred their desert horses. When the EAO published their first Egyptian studbook, it contained only horses bred at the Egyptian State Stud El Zahraa, as well as three Tahawy horses of notable owners – the rest of the Tahawy horses were “forgotten”.
When the Radtkes visited the Tahawy tribe, Sheikh Soliman asked them to register their horses in a studbook with all their pedigrees and details. That they did according to WAHO principles with the 50 most important horses. Nevertheless, their request to the EAO to recognize these horses did not find any hearing. In the meantime, the group of Tahawy horses melted down to a few individuals, but is not yet entirely lost.
But this book is not only about horses, it also features the life and culture of the Tahawy Bedouin, their hunt with horses, falcons and Salukis, the way to breed and raise horses, the pedigrees of their horses and the story of few individual horses who found their way to Europe. The photos are of great cultural and historical value, as they are mostly from the archives of Sheikh Soliman and were scanned and edited especially for this book.
For those, who think that these horses did not have any lasting influence on today’s worldwide breeding, and therefore may remain into oblivion, is wrong. The last chapter by Joe Ferris deals with the question which contemporary horses carry Tahawy blood. This includes Nazeer as well as the horses of Hamdan Stables, Nasr Mareis World Champion Mare Gelgelah Albadeia as well as Marwan Al Shaqab, who traces back 34 times to the Tahawy mare Maanagia Hadragia. Sure, these individual horses that appear in the pedigrees of today’s Arabians are WAHO accepted. All the more regrettable that political reasons have prevented recognition of the remaining Tahawy horses until today.
The book is a “must” for anybody, who is interested in the history of the Arabian breed. A downer remains, because the graphic processing, the layout, would have deserved more professionalism.

How to order an Online Subscription?

This website uses cookies to improve your experience while you navigate through the website. Out of these, the cookies that are categorized as necessary are stored on your browser as they are essential for the working of basic functionalities of the website. We also use third-party cookies that help us analyze and understand how you use this website. These cookies will be stored in your browser only with your consent. You also have the option to opt-out of these cookies. But opting out of some of these cookies may affect your browsing experience.
Notwendige immer aktiv

Any cookies that may not be particularly necessary for the website to function and is used specifically to collect user personal data via analytics, ads, other embedded contents are termed as non-necessary cookies. It is mandatory to procure user consent prior to running these cookies on your website.